There are times when it’s not convenient — or socially acceptable — to walk around wearing headphones. Bose audio sunglasses solve that problem by discreetly piping your favorite music in from speakers that have been built into a pair of stylish frames. Sound too good to be true? It isn’t. These ultra-cool sunglasses have been on the market for over a year now, and they couldn’t be easier to use. Here’s how they work.

These lightweight sunglasses have built-in speakers that are angled toward the ears. The audio isn’t loud enough for bystanders to hear, but it’s also not so loud that it drowns out real-world sounds for the user. A small button on the right arm turns the audio on and off and can be used to accept calls. A microphone, which is built into the arm of the glasses along with the speakers, makes it possible to take calls while wearing the device. The glasses, which are charged using a cable, have a 3-and-a-half hour battery life.

These glasses also have an augmented reality feature, which essentially gives the user access to apps, including one that offers walking directions based on local points of reference. There’s also a golf app that helps you decide which club to use. A smartphone with GPS is needed to support the apps.

Bose designed the glasses with comfortable, modern materials including nylon rims, scratch-resistant lenses, and metal hinges. They’re even available with prescription lenses. Although the arms on these glasses are on the chunky side because of all the technology that’s embedded in them, the device is lightweight and comfortable. The glasses come with a carrying case. 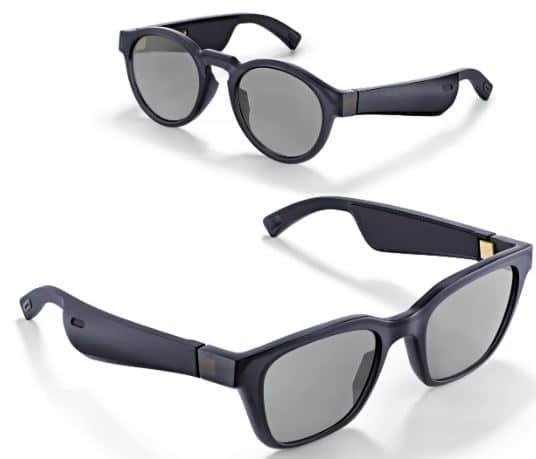 When to Use Them

Because these are sunglasses, they’re best for outdoor uses like strolling in a city park, walking commutes, or even running. The fact that the speakers don’t totally drown out real-world noise can be an advantage in some urban environments because it helps the wearer stay alert and in touch with his or her physical surroundings. Audio sunglasses can be a fun and stylish change of pace from your usual headphones, or an option for times when you’re worried that headphones will mess up your hair.

They’re Not Just for Music

Audiobooks, cell phone calls, and podcasts are just a few of the things you can listen to while wearing these sunglasses. 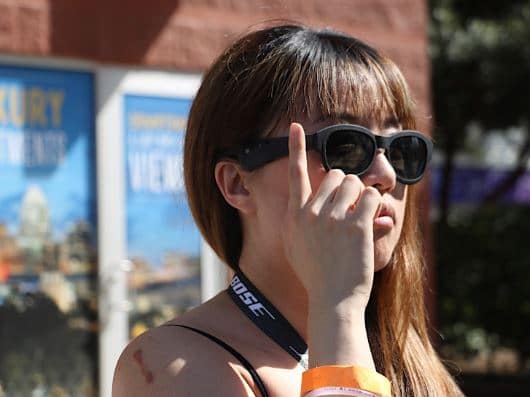 Although Bose audio sunglasses generally fit into the smart glasses category, they don’t have the same features as Google Glass. The primary features of these Bose glasses are the built-in Bluetooth speakers and the augmented reality apps. The sound is still excellent, especially for speakers that don’t sit directly over the ears, and the overall device gives users plenty of features to play around with.