5 Futuristic Gadgets That Are Right Around the Corner

Sure, it’s 2020, and we don’t yet have flying cars or hoverboards. All the same, the future is looking very bright on the technology front, with tons of futuristic gadgets that would have been considered science fiction just a decade or ago about to become reality. Here are five technologies straight out of your favorite sci-fi movies that are about to hit the mainstream.

With the release of the Samsung Galaxy Fold, the era of foldable phones has officially begun. These gadgets might look like they’re the size of an iPhone, but unfold them and they seamlessly transform into a tablet-sized gadget. Foldable phones are in their infancy now and still very expensive, but it’s easy to imagine super-thin phones that can fold multiple times, transforming your everyday gadget into a modular, do-it-all device.

You may have seen concepts for super high-definition rollable television sets, like the LG Signature OLED TV R. Most of these futuristic gadgets are prohibitively expensive for the average consumer, but soon enough they’ll become the norm. Imagine a television that hides inside your media cabinet, only emerging with the press of a button and unfurling to reveal a majestic 65-inch display. It’ll happen soon!

There are a few companies working on variations of at-home helper robots, and soon you’ll be able to have your very own version of Rosie from The Jetsons. Ubtech’s Walker Smart Home Robot, for example, can walk on two legs, carry your grocery bags to the kitchen, grab you a drink from the fridge, and more. At five feet tall, it’s like having the robot butler you dreamed of as a kid!

Tesla may have introduced its autopilot feature a couple years back, but that’s just scratching the surface of what the self-driving cars of the near future will be capable of. Soon, you’ll be able to take a nap on the ride home or read a book as your car perfectly navigates to your driveway. Running late? Tell your car to drop you off and it will park itself! This, more than perhaps any other futuristic gadget on this list, will change the way we live.

Have you ever watched an Avengers movie and wished you could wear a metal suit that enhances your strength, just like Iron Man? Soon, that dream will become a reality. The TALOS, or Tactical Assault Light Operator Suit, is a military concept that provides ballistic, shock, and fire protection, all without limiting movement. You might not be flying around blasting energy beams from your hands anytime soon, but you could be wearing strength-enhancing tech!

The Future Is Here!

These futuristic gadgets are just scratching the surface of what’s coming. If you’re a gamer, augmented reality will soon turn your entire environment into an immersive video game level with the likes of Microsoft Hololens and Magic Leap. Health products like alarm clocks that sense your sleep cycle and wake you up at the right time are already here. If you love futuristic gadgets, you’ll be living your best sci-fi life before you know it! 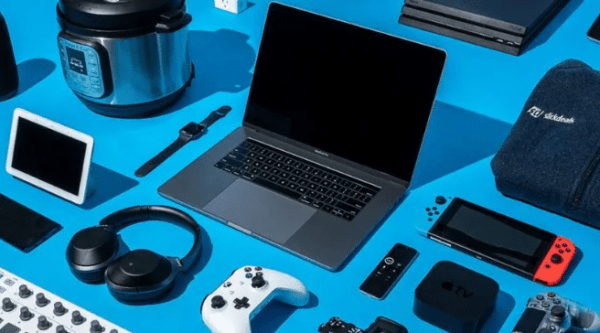 Do you feel you’re getting left behind with all the new tech products? Have you bought a bunch of them but still find that they’re…

In 2022, we will see more and more smart products coming out. What does this mean for the consumer? It means that you’ll be…

If you are interested in tech or cryptocurrency, blockchain is a term you have probably heard thrown around quite a bit in the last…

Read More »What Is Blockchain Technology?